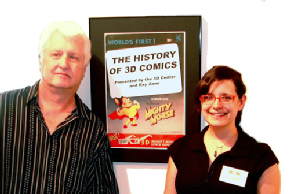 A conversation with Annie Dubinsky
by Ray Zone

On July 19, 2007 an exhibition on “The  History of 3D Comics” opened at the 3D  Center. Running through September 9, the  exhibition was the brainchild of Associate  Director Annie Dubinsky.

At the opening reception, Annie and I discussed the genesis and format of the show. Though 3D comics have been shown in museums and galleries before, this landmark exhibit is the first to be entirely dedicated to three-dimensional comic books. This conversation took place as gallery patrons began arriving.

Zone: Where did you get the idea to do an exhibit on 3D Comics?
Dubinsky: We received a donation from one of our local members at the end of 2006 of both 1950s and 1980s 3-D Zone comics. And instead of just putting them in back in storage I thought of doing a show and the first person I thought to call was you. So I gave you a call and asked you if you wanted to put something together. That was the inspiration for it. Actually it was just having a box of them on my desk.

Zone: What were your primary sources for your research?
Dubinsky: The primary sources were you! (laughter) I did a lot of research at the library. The Amazing 3-D book (Morgan & Symmes) was good. Although I found a couple of faulty dates in it, your website, some New York Times articles about the 3-D comics craze in the 1950s and the anti-comic fever that went around in the mid-fifties.
But for the most part, the intention behind the exhibit was to show where it all started and then to highlight your work in the 1980s.

Zone: This is very interesting how you’ve got the comics displayed with a little schematic or guide indicating the titles.
Dubinsky: Yeah. Originally we thought about printing the 3D comic covers really huge. The problem is not just space because we wanted to exhibit as many as we could. But also the printing costs were starting to get a little expensive. And here’s the other thing that made me really decide on printing them to size. Because there was going to be a mixture of actual comics and scans, I just wanted the consistency. And I thought it would look good to have them tiled. We thought it would look good to mat everything. With the logistics of displaying this, since we’re mostly volunteers here, it was a little more convenient to do it this way. It gave a nice grid. We could match them and take the comics out after the show.

Zone: It looks great.
Dubinsky: This way with the little legends we could show people who did the artwork and which issue it is. There’s no real rhyme or reason or chronological order. It’s just two 1950s panels and then three 1980s panels.

Zone: Did you find it a little baffling when I pointed out the erratic nature of comic book artist documentation?
Dubinsky: Yes. Yes, I did. I didn’t know where to start so I just took your word. I just took your suggestion and only documented where I could.

Zone: Your narrative shows considerable research. And it is potentially a very complex story.

Dubinsky: It is, And this doesn’t even include the history of 3-D drawing, or anything to do with View-Master cartoon reels. In fact, in the introductory essay, it describes this exhibition as a drop in the bucket. But I think it’s a good representation of how 3D comics started. And of how they’ve developed. That was my intention. We’re working with a small space and we have to limit it to what will fit.

Zone: Is this the first show you’ve instigated, spear-headed and otherwise curated?
Dubinsky: This is the second show. I did a show called “The Magic of View-Master” earlier this year. That was the first one that I put together. But these are the two that I’ve been wanting to do. And the next one will be a show about vision therapy.

Zone: I have considerable research materials on the subject.
Dubinsky: I’ll be calling you. (laughter)