Congratulations to the Raffle Winners!

Thank you to all the winners participating with donations.  There were 38 individuals participating for a chance to win one of three Fujifilm W3 3D cameras.

The donations totaled up to 175 chances to win.  The drawing was done at random and once a winner was chosen, their chances were eliminated from further drawings as you could only win one time.  So some with a large number of chances won a prize, while some with only a few chances won a prize.

Those winning a new Fujifilm W3 3D camera donated to 3D Center by Fujifilm were:

- David A. of Oregon, Gregory P. of Washington and Thomas M. of Minnesota.

The committee allowed three runner ups to be drawn and they will be awarded a nice selection of View-Master Collectors' Gift Sets of Images from the 3D Center Gallery.  The Sets are courtesy of our Sponsor, Image3D of Beavercreek, Oregon.

The runner up winners were:

- Alan H. of Michigan, Claire D. of Oregon and Fred K. of Oregon.

This Event Occurred In December 2010

Come on in and get your Christmas photo made in the Santa Photo Booth !

Further options will be available.

Last chance for a Christmas gift ! 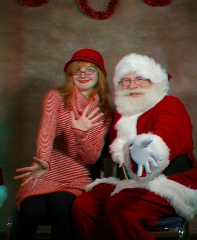